She just does. Fake Tom is her BFF.

I am pretty sure it’s because for 7 months, REAL Tom laid on top of her and kept her warm (er). 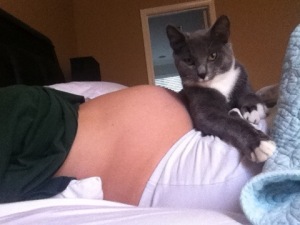 But when she came out into the real world, Tom looks at here with these

big SCARED eyes…like she’s a Rottweiler and he his her next meal. Not to say that she wouldn’t try to lick or eat the cat, because she totally would.

So we birthed fake Tom to take his place.

And he’s sort of a dead ringer for the real Tom right?!

So here we have it folks, our lovey.  I’ve already bought a back up fake Tom just incase something tragic were to happen to our first one!

I hope everyone is snuggling with their own version of fake Tom tonight!

3 thoughts on “She loves him…”

©Bell and Birminghambell, 2010-2013. Unauthorized use and/or duplication of this material without express and written permission from this blog’s author and/or owner is strictly prohibited. Excerpts and links may be used, provided that full and clear credit is given to Birminghambell with appropriate and specific direction to the original content.
Loading Comments...
%d bloggers like this: