For those normal people out there, that’s 6 months and 1 week.

It really looks sooooo much bigger when I’m standing up…….but who wants to stand up? Not this girl.

Also, look at my hair. I paid someone to make it look like this. That sounds really rude. But it IS what I asked for. I asked for roots. Well, I asked for an ombre hair color job. If you’re a hair stylist, chances are you’re not an ombre expert…I get it. I used to work in a hospital, where I was expected to draw blood from people. You know what? I had to practice on someone. That’s right people, I stuck needles in patients with no idea of how to do it. Well, I had some idea, but not any real human experience. That’s how education works. I’m not upset the hair is a little off from what I asked for because the nice stylist offered to fix it tomorrow, and I’m all fine and dandy with that. 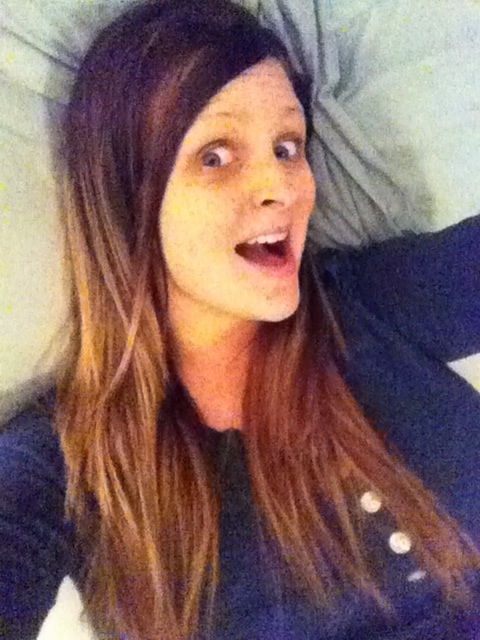 Here’s what I wanted it to look like compared to how it turned out:

Maybe I was just wishing the hair style would make me look as skinny and tan as Giulana Rancic.

Anyways…here’s what’s going on inside and outside of my body.

Size of the baby: He is about 1.5lb in weight, you might compare his size to a cauliflower now.  It’s crazy to think that in just 2 weeks he has grown a half a pound!  Probably more than that since I’ve been eating like a sumo wrestler.  Parents.com says my baby is making his first poop right now.  Lovely.

Movement: Every few hours I feel him.  But since I have an anterior placenta, it’s such a strange feeling compared to what Harper felt like.  I feel him move, but the feeling is down LOW.  Like I’m getting kicked in my lady parts instead of my tummy.  I would describe it as if someone were to stomp on your foot, but your hand hurt when they did it instead.  Phantom like feeling.

What I miss:  I miss having Tom lay on my stomach every night.  If only I could find a kitten rental store in town.  And before you call me crazy, I saw a story on the news about a girl who rents out puppies!!!   So it’s real, people!!!!

Cravings: Lebanese cookies called ghraybeh.  My mother in law makes them every Christmas, and even though she puts nuts in them (which I don’t normally like), THE’RE SO GOOD.  She released her family recipe to me last week and of course I’m almost done eating my whole batch.  They’re buttery heaven.  The recipe calls for SEVEN sticks of butter.  SEVEN.  Not that it deters me from eating them.

Best moment this week:  When Harper said “Mon-KEY”!!!  Oh, and finishing my Christmas shopping for John.  Now if I could just START on everyone else’s gifts!

Worst moment this week:  I have 2 worst moments.  1.  going to Harper’s year old check up for FOUR shots.  😦  FOUR!!!!!   2.  Realizing that I was completely caught up on the “Parenthood” series on TV.  I think it’s my all time favorite TV show.

Holding on to Fake Tom knowing she’s in the doctor’s office.

I must say after typing this out, my worst moments don’t even compare to what some people are feeling this Christmas, especially in the CT massacre. My heart hurts for everyone involved. I quit watching the news the day it happened. I was basically disgusted with the things I saw the media releasing. I feel like pictures of terrified students leaving the school are inappropriate to air to the world. Video of medical examiners entering the school broke my heart even more for some reason. I just kept thinking, what if you’re the victim’s family and you’re seeing these medical examiners going to be with a child you can’t even see yet. There were a handful of inappropriate things aired on the news that day, and I’m sure they’re still being aired. I’m disappointed that the police didn’t close that entire scene off from the media until the entire investigation was complete. I’m not “looking for someone to project my anger about the situation on”, I’m simply pointing out that they should know better, use more discretion, and be more thoughtful. They should say “would I want to see this footage if my child were in that school”?

I’m also curious about if the news of this tragedy is reaching my overseas followers…guys???

Hug your kids and enjoy your week with them!
XOXO
BEll