Don’t go to Old Navy to see the cuteness they have put out for girls!!!

Today Harper and I went to meet a Birmingham mothers group. It went well…she was able to see other kids and interact with them, even though she’s one of the youngest there I think she enjoyed it!

I had somewhere to be right after lunch, so I decided to hit up a place to eat at the outdoor mall I was already at, or we wouldn’t have a chance to eat until 2. Harper ate a bowl of macaroni and figured out how to use a straw! We had been trying to teach her how FOREVER, I think she just got spoiled with us dropping water in her mouth from straws like a baby bird, and just never had a reason to learn. We wrapped up lunch just in time to head to my appointment. We were full speed in the stroller towards the exit…then it happened. Someone said “ma’am your baby just spit up”.

OH MY GOSH. I looked down into the stroller to see that she hadn’t spit up, she had THROWN UP. Like 3 cups worth of throw up. LIKE A LOT OF THROW UP. ALL over her. ALL over the stroller. ALL over her fur boots. I run to the front where the hostess stand was and frantically asked for a towel. The waiter looked at Harper, and handed me a linen napkin. I could’ve strangled him. I SAID TOWEL, MAN!!! TOWEL!!!!!!!!!!!!!!! I went behind the hostess stand myself and grabbed a REAL towel threw it over her, and barked at the idiot host “WHERE ARE YOUR BATHROOMS?!????”.

He pointed to the back.

I scurry to the bathroom with my vomit covered kid and realize I didn’t pack ANY extra clothes. NONE. Not even a blanket to wrap her up in.

I did what any rational person would do, stripped her down, wrapped her in a thin towel, and threw my scarf over her neck.

I’m at an OUTDOOR mall. I have to go outside with my naked STINKY kid who is wearing a toga. It’s a little chilly!!!

I RAN to the Old navy a few stores down, went to the back and realized I was in baby girl clothes heaven. The outfit I found kind of made up for the nasty incident. 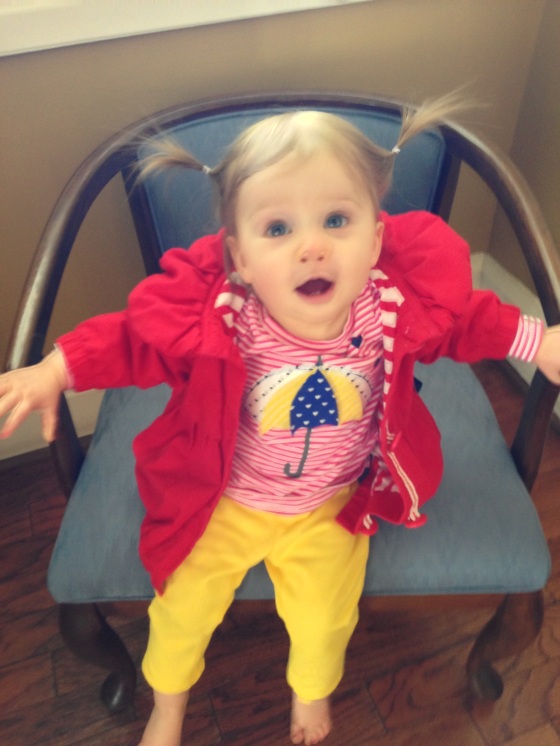 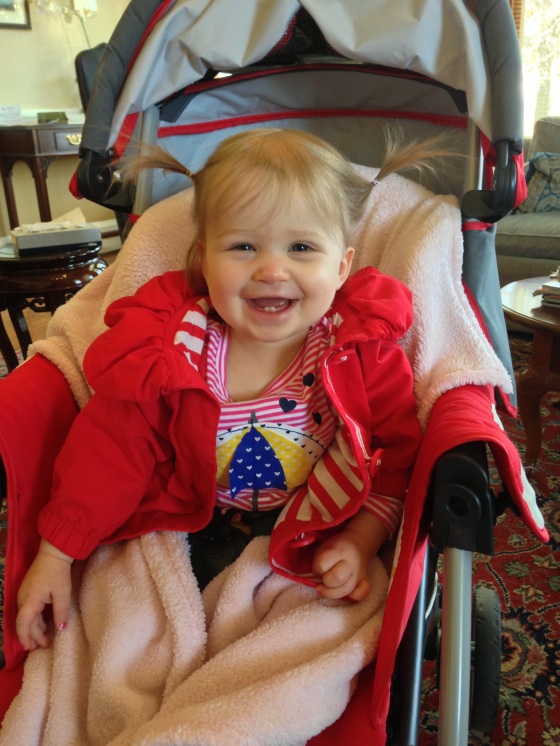 Go to Old navy. Now. LOVED everything they had out! Lots of umbrella stuff!!!

I hope nobody else out there got thrown up on today!

8 thoughts on “Whatever you do…”